Moon Camp is an educational project ran by a collaboration between ESA (European Space Agency) and the Airbus Foundation. We (the class 4C from the “Gymnasium am Augarten”, school year 2022) used innovative learning technologies to design our own moon settlement with a 3D modelling tool!

It features preparatory classroom activities and we focused on learning by design and science experimentation (led by Prof. Ivan Lucic).

We designed our own moon camp, which adapted to the lunar environment. We considered the use of local resources at the moon and provided protective, living, and working facilities for the astronauts.

We also met aliens there. 🙂

Numerous moon camps have been designed so far and many of these are good, but our camp is an extraordinary and innovative project. In fact, our lunar base is not a conventional base on the moon. Our camp consists of many rooms, which are differently designed and have different functions, depending on each room. There are twelve stations in total. The gym, for example, has the primary function of training the astronauts after their arrival. One of our other rooms is the medical facility. As the name already suggests, it offers medical care for the astronauts. Of course, this room is accessible from every side of the base, so that the patients can be treated as quickly as possible. Likewise, our corridors are also specially made, depending on which room you go in, meaning that each corridor has been colour-matched to the respective room, so that the design can properly guide from room to room. As you can easily see, a very long corridor is relatively close to the gym. The idea is that you can go back to the common room after the training or back to the headquarters. Furthermore, there is our moon rover. A moon rover is a vehicle specially built for the moon. In our case, our lunar rover is equipped with two cameras, two seats, a large solar panel that provides the electricity, and a communication device. But this has only been a small part of our large moon camp so far.

STATIONS, UNITS AND DESCRIPTION THE MOON CAMP BASE: MC-4C

For our forge on the moon we use the following materials: Glass is used for the base. Iron is used for the tools and it will also be utilized for strengthening the walls. We don’t use flammable material, however. We also provide water for the astronauts from our water tanks. We prepared all kinds of food and packed it in a vacuum packaging. For power, we set up a row of solar panels. We have rooms filled with plants which provide oxygen. Additionally, there are oxygen tanks, too, just in case. 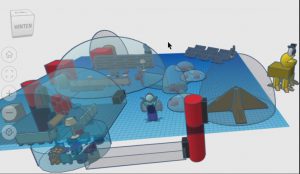 A couple of astronauts visit the queen of the planet. The astronauts need three days and four hours to reach the moon. An army of aliens surrounds the queen. Their job is to protect the queen. On the moon, the queen is like a memorial, the only difference being that she’s alive and not a statue. There are also five springs on the planet that provide water. On the other side of the planet, there is a large dining hall. The most important thing on the planet is the power supply. Therefore, there are two generators that supply the planet.

The most important thing in our space station would be breathable air. But how do we get oxygen if there aren’t any plants on the moon?

One possible solution would be to bring oxygen from the Earth, and we produce oxygen by running electricity through water. This is called electrolysis. The air and water on our space station originally comes from the Earth. The electrolysis would be conducted in our O2 chamber. We can also get oxygen from the moon sand. To achieve that, we just have to put it in a sieve and then it would be leached in our machine. 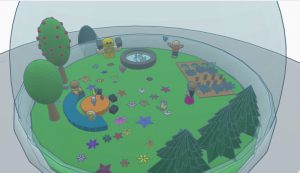 We take particular care of the astronauts, so they are treated if they have any problems. Injuries can be healed in our first aid-centre and treated depending on the injury. We have medicine, syringes, bandages, an operating room, as well as beds and drawers where minor injuries can be treated. If the space suit is damaged, we always have spare suits and oxygen tanks prepared at the headquarters. There is also a sofa in the centre so that the patients can sit down to prevent unconsciousness.

Our base is located on the moon. In our base we build robots and machines that we use for various tasks. We sleep in small rooms where we also read books and work on our computers. We have a small living room where we relax and talk to each other. On the moon it never gets boring because of the gravity, it’s always exciting. The food on the moon comes in plastic bags. We sleep in sleeping bags, so we don’t float around while we’re sleeping.

A day in the life of an astronaut on the moon

The astronauts have special sleeping quarters where everything is well set up for them. They wake up at 8 a.m. and after their morning routine in the bathroom at 8.30 a.m., it is time for breakfast. Since they are on the moon, they always have to keep their bodies fit. That’s why the astronauts have gym time at 10 o’clock. After two hours of working out, they have free time. Most of the astronauts stay in the lounge or in our alien swimming pool that we have in our moon camp. But the astronauts can’t only relax, they also have to work. In the computer room they communicate with the base on Earth and give feedback on what they have to improve in the camp. After a hard day of work, they have dinner and, later on, they go to bed to rest for the next day.